NOEL PLAYFORD TO BE MAYOR AGAIN


Noel Playford will be Noosa mayor again for the next two years, with a sweeping 79% of the vote,  just short of the 81% majority his Free Noosa campaign won in the March referendum to return our council.

The rest of the new Noosa council will look like this;

Darlene Gower will just miss out with 6.5 % of the vote.

The result has not yet been officially declared, but is now considered firm.

Noel Playford met with the new organisers of the Peregian Originals event and assured them he was a strong supporter of live music. Rising star Sahara Beck, from Peregian Beach, also launched her new EP.


NOEL PLAYFORD: THE GIANT LOCAL BENEFITS OF SUPPORTING LOCAL BUSINESS.
Noel Playford says his plan for Noosa includes a strong acknowledgement that locally-owned family businesses are the backbone of our economy and need to be encouraged.


The Mayoral candidate says he believes in a local preference policy for Council purchasing and contracts, but support for small, local businesses needs to go much further than that.


He  says "One of the very successful recent developments has been the business mentoring program run under the umbrella of the Chamber of Commerce.  This is a collection of some of Noosa's best and brightest;  proven business leaders who volunteer their time to give new and struggling businesses a hand."

"I'd like to see how Council can work more closely with experts like this to support and extend the brilliant mentoring work they're doing."

Mr Playford says he will also look at a role council might play in supporting new technology and internet start-ups, particularly those that can benefit by using "co-working spaces" where they interact with each other and with successful digital innovators.


He says the crucial role of small business is sometimes overlooked by those who don't understand the local economy.   "Local businesses provide the lion's share of employment because they use local advertisers, local accountants, local lawyers, local printers.  Their profits stream into the local community."


He says this is a powerful message; "money spent in local, family-owned businesses helps our Noosa economy much more than money spent with big corporations."


Mr Playford says the council's role is not in attracting and retaining businesses.  "This is where market forces and individuals determine what works and what doesn't.    Instead, the council can do lots of clever things to connect small business with experts who can help them prosper and grow."

'COMMUNITY' IS MUCH MORE THAN A FEEL GOOD WORD.

Mayoral candidate Noel Playford says he wants more direct support and encouragement for the community organisations that are the "glue that binds Noosa Shire together".

Mr Playford says this area is well known for the huge number of residents who volunteer in various ways.  "It's a magnificent human resource" he says "and one that the incoming Noosa council needs to nurture."

He says a little assistance given to community groups that care deeply about their neighbourhood can go a long way.

"Whether it's re-vegetating sand dunes at Peregian Beach, or planning for a kids' skate park in Kin Kin, it's local community groups that are doing the hard work on behalf of locals and they deserve to be supported."

The mayoral candidate says there are scores of examples of where decision-making works better at a local level than by edicts handed down by public servants many kilometres away.

If you include sporting, social, environmental, service clubs, business, arts, historical, charitable, church and broad community organisations, much of the community is touched one way or another.

Noel Playford says support for these groups makes simple social and economic good sense.   "It's where a smart Council can work hand in hand with its community." 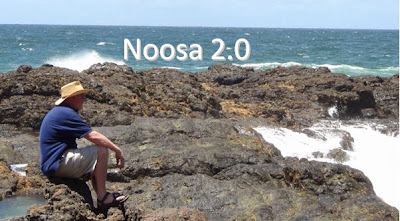 Noosa 2.0 is the future. It is the way we use technology and the internet to bring our council and our community much closer together. It's how we give our community the power to become a genuine part of the decision-making process.

It is also a way to show the rest of Australia how open, transparent, consultative local government can work.

So how do we do this ? Noosa 2.0 represents the second life of our council, and a chance to start from scratch and build something better than we had before.

It's our extension of Web 2.0 which refers to technologies that encourage online discussion, sharing and collaboration, and Gov 2.0 which was all about applying these technologies to the democratic process.

There are four central pillars of Noosa 2.0.

1/. Leadership that's committed to open, transparent government, and prepared to embrace new technologies and communication tools to achieve this.

2/. Open data. A huge leap in the quantity and type of local government information that people can easily access. This allows innovative people outside council to employ this information in new and useful ways. It helps us to make sense of all the information we collect. The default position must be that information should be public, unless there's a very good reason for it not to be.

3/. Community-focussed services. We had a friendly, accessible council before. We will again, with the addition of new technologies that make it easier to connect with our council in a way that suits our community.

4/. Participatory Government. Democracy is much more than ticking a ballot box every four years. New technology allows our community to have its say on important issues. We can get involved in local government, not just by turning up at a town hall meeting, but by a few clicks on our laptop or mobile device and by joining online discussions with the rest of our community.

There's nothing to be scared of in this process of bringing our council to the top ranks of open government. We still need to do all the basic things right, provide the services people expect and run a financially responsible council.

We can become a leader in using technology to open up the democratic process, and we can enhance the Noosa image as not just an environmentally protected place, but a place that's forward-thinking , smart and flexible.

Truly open democracy involves a cultural change and sometimes it's hard work learning to do things in new ways. But the cost of not embracing it is just too great.

This is part of the challenge and the opportunity that lies ahead of us.


Email ThisBlogThis!Share to TwitterShare to FacebookShare to Pinterest
Home
Subscribe to: Posts (Atom)
On March 9th the people of Noosa claimed back their local government after a five year struggle.

Free Noosa is committed to the next stage - making the new Noosa Council truly world class.